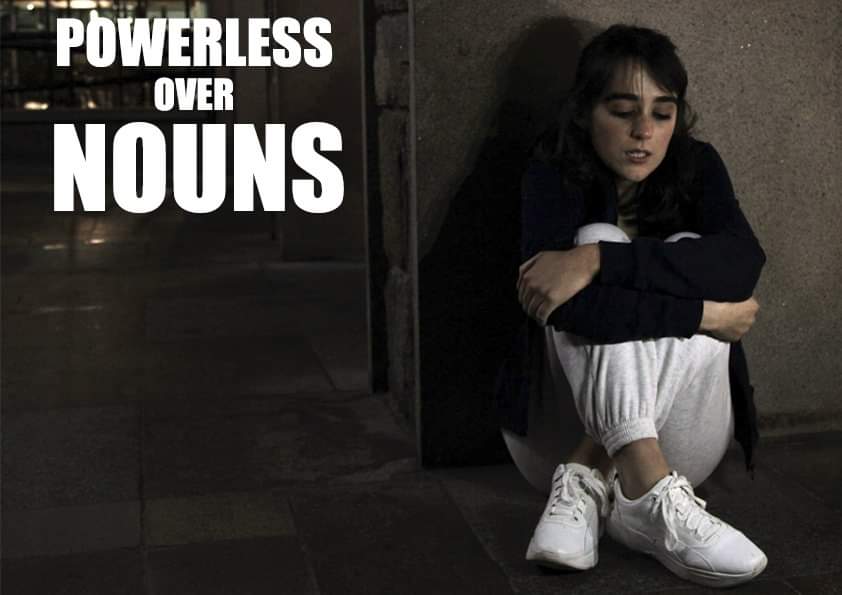 Powerless Over Nouns is the title given to British Playwright Duncan MacMillan’s Places, People and Things. First performed at the National Theatre of London in 2015, the play deals with extremely difficult subjects such as addiction and mental health. The play puts the viewer in the skin of Emma, an actress who decides to check into a rehab clinic in order to get better. Right from the start of the play, the viewer knows this is not going to be an easy watch – for the whole 2 hours of the play, I was absolutely blown away not only by the story itself, but also by the incredible performance that the actors delivered. Following The Dumb Waiter and the student written Dedicated to Adelaide, Powerless Over Nouns was the company’s third and final show of the year.

Powerless Over Nouns was fantastically directed by Ciorstan Towers and Cameron Clarke with Emma Rafferty, who has been with the company since her first year at university, in the main role of Emma. The result was a heart-wrenching and extremely distressing performance that will remain in your thoughts for a long time to come. In fact, the performance started with a disclaimer by one of the directors himself as the play touches upon very painful and uncomfortable subjects – brochures and literature dealing with the subjects of drugs, alcoholism and addiction were put at the disposal of the audience. At this point, I understood that Powerless Over Nouns would leave me in bits by the end of the performance. Neither addiction or the subsequent recovery process were glamourised.

The most compelling element of the performance was the acting itself – the actors brought to life the characters with their pains, regrets and their weaknesses in an extremely truthful way. The acting was, in other words, phenomenal and in my opinion, rendered the play one of Centre Stage’s best productions that I have had the chance to see. Emma Rafferty’s acting was spectacular and genuine – the way she transmitted her character’s paranoia and extremities of emotions did not fail to touch me. The incessant scratching by the actress (leaving red marks on her chest and arms which made me wonder if they were not painful) and facial expressions gave the character a poignantly distressing and painful aspect to her. Emma (the character not the actress) is a tragic and unfortunate character for which one cannot help but feel pity.

Another noteworthy performance is Greig Taylor’s performance in the role of Paul Howard, a drug and alcohol addict finding himself in the same rehab clinic as Emma. His character is, although tragic altogether as well, extremely dislikeable and even stress-inducing. The cacophonic shouting and the extent of his delirium were acted with such vigour that I found myself genuinely questioning the actor’s state of mind.

The directing was brilliantly done, and it could immediately be seen in how the transition between the different scenes was handled. The scenes seemingly flowing into one another and mixing together in such an effortless way provided a beautiful experience to see – from a party to scene to the clinic, back to the party and to a car crash, the handling of the transitions not only beautifully served the purpose of storytelling but also offered us a glimpse into Emma’s mind, a deranged mind for whom blacking out and dissociation are not unknown.

The lighting and the sound direction were, although simple, well-executed. The music choice of the production could, however, have been chosen more carefully. The sound and music effects that could be heard during the time-lapses or the transitions wonderfully added to the tension of the story. Yet, some of the songs chosen quite broke the spell of the performance and the acting for me. However, this was a minor issue quickly forgotten.

The venue itself in the Aberdeen Arts Centre was small and could present potential problems for future productions. As I was seated in the front row, I was sometimes anxious to have an actor accidentally step on my foot or having a chair thrown at me (courtesy of Greig Taylor’s amazingly frantic performance). However, I found that the closeness with the stage, particularly during the group therapy scenes where characters openly talked about their addiction, transported me into the scene itself as if I was part of this group therapy session myself. Furthermore, I was told by the director Ciorstan Towers that another problem arose from the small size of the which left some audience members at the back having difficulties viewing the stage. In the future, I hope that Centre Stage manages to reserve the drama studio in the MacRobert Building as this venue provides excellent seating for the whole audience.

Centre Stage did not fail in providing us with a production of quality. Tragic, distressing, anguishing and extremely draining were the adjectives that came to my mind by the end of the performance. I left the venue with racing thoughts and a feeling of despair as I knew that whatever was presented to me in the form of fiction, is the reality for many people. The acting and the overall production of Powerless over Nouns is a testament to Centre Stage’s passion and talent.